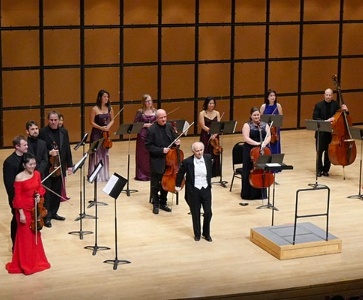 Sinfonia Toronto performs a kaleidoscope of delights from four centuries. Pianist Sona Barseghyan joins for Bach and a gorgeous rhapsody.

A variety program spanning four centuries - Pianist Sona Barsghyan joins Maestro Arman and the orchestra for Bach and a dreamy Rhapsody to open, followed by three entertaining divertimentos and one of the most famous melodies of all time, Rachmaninov’s Vocalise.

BACH Keyboard Concerto in A major

Virtual concert will be streamed live from Glenn Gould Studio on April 9, 8 pm and will be available for viewing until May 8.

Sona Barseghyan was born in 1989 in Yerevan, Armenia. She began playing the piano at the age of seven at the Tchaikovsky Music School. At 17 she joined the class of Sergey Saradzhyan at the Yerevan State Conservatory. After receiving Bachelors and Masters degrees With Excellence there she moved to Germany to continue her studies at Cologne Conservatory with Nina Tichman. She graduated from Cologne Conservatory in 2016 with a Ph.D. Sona has also participated in masterclasses with Norma Fisher, Vladimir Krainev, Phillippe Cassard, Evgeny Kissin, Tamas Ungar, Arkadiy Zenziper, Vadim Monastirskiy and Leonel Morales.

Sona has also been a laureate of competitions in France and Italy, and received special awards during her studies including AGBU Performing Arts Fellowships, a scholarship from the International Spivakov Benevolent Fund, and the All Armenia Fund ‘A way to the future’ Prize.

As well as performing recitals and concertos as soloist, Sona is an experienced chamber musician. Since 2011 she has been a guest artist at the Schlern International Music Festival. She has performed throughout Europe and in Australia, Belarus, Georgia, Russia, Australia, United Arab Emirates, and the US. She has ben half of the piano duo ‘Sonet’ with her mother, pianist Armine Grigoryan. The duo has released a CD of works by Armenian composers. Sona has also been a featured artist of “Weltklassik am Klavier.”

Sinfonia Toronto now in its 22nd season, has toured twice in Europe, in the US, South America and China, receiving glowing reviews. It has released four CD’s, including a JUNO Award winner, and performs in many Ontario cities. Its extensive repertoire includes all the major string orchestra works of the 18th through 21st centuries, and it has premiered many new works. Under the baton of Nurhan Arman the orchestra’s performances present outstanding international guest artists and prominent Canadian musicians.